Expat Games – Navigating the Terrain as a Trailing Spouse 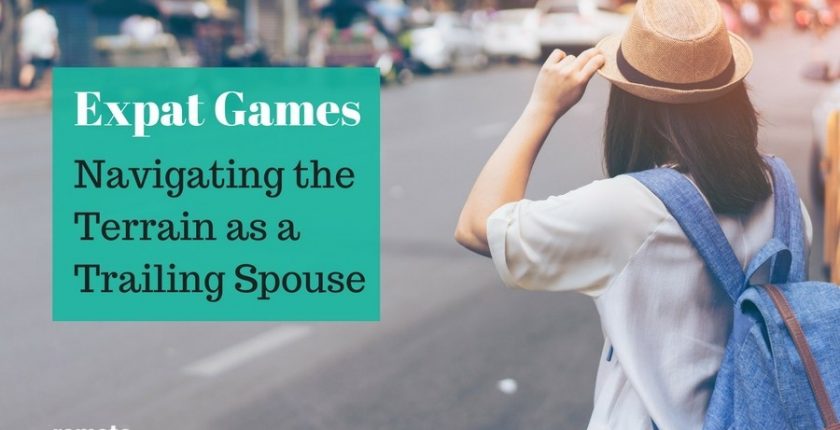 It’s an all too familiar scenario in expat circles; one partner gets a job requiring relocation and the couple moves together only to find disenchantment quickly takes hold for the trailing spouse.

Now, more than ever adventurous couples are accepting assignments beyond the borders of their home country, building a new life together as expats. It can be an exciting and uncertain time. While it wouldn’t be an adventure without some uncertainty, the biggest risk is known as “trailing spouse syndrome’, with over 65% of assignments failing as a result of an unhappy other half.

In most cases, the trailing spouse is a highly educated, advanced professional who left their career to support their partner. They unwittingly become hobbyists, homemakers; often bored, and certainly frustrated. A widening time gap develops in the trailing spouse’s resume as they struggle to advance their own career and make use of their skill set.

We look at some typical challenges facing the modern trailing spouse and consider working solutions to help ease the transition.

The term itself, “trailing spouse”, leaves the partner out of the equation almost completely by identifying them as if they were an appendage or a weak-willed follower. In an article in the Huffington Post, expat supporter Quenby Wilcox runs through the gamut of potential names. “Accompanying spouse” still sounds uncomfortably similar to trailing spouse, though some of the sting is lightened.

She also suggests STUDS (Spouses Trailing Under Duress) as a reference to men in the trailing spouse role, but this certainly sounds as if they are unfairly forced to be there. STARS (Spouses Traveling and Relocating Successfully) has a much more positive tone but lacks the descriptive power a name for this experience truly needs and deserves. Wilcox is one of many pulling together resources and trailing spouse survival guides. Some offer advice for the spouse to consider the experience as an opportunity to travel and learn about other cultures; reach out, connect, share resources, and organise.

There are also companies designed and lead by entrepreneurs, themselves trailing spouses, just like the Debbie Dutton the founder of Remote Work Hub. Deb launched Remote Work Hub to offer another solution to the issue of trying to find work in locations where job opportunities are limited, allowing people the ability to connect to legitimate remote jobs so they can work from anywhere in the world.

Gender has its place in the conversation about identity and the experience of the trailing spouse. Statistically, women make up the majority of this group, but there are plenty of men, and their experience is completely different. For men, expectations are different and the judgement about how they spend their time is even more harsh. Even in the current literature on the topic of the trailing spouse, articles and research papers are written with the assumption that women are the audience.

Men, if included at all, are left to the afterthought by being included in parenthesis, leaving them effectively left out of the conversation. This oversight is because the current trailing spouse community has historically been made up of mostly women. However, this is certainly changing with educational and medical professionals leading the way in sponsoring their husbands and families.

Family life may be strained as partners and family adjust to a new home with different social guidelines, culture shock, mobility learning curves, and dietary adjustments. It’s easy to feel confused about where to find resources and how to connect to a network when you are hundreds or thousands of miles from friends and family. Military families have been doing it for years so take a lesson from them. Begin with the company for which you are relocating. The HR department and people already there and on the job will have a wealth of knowledge.

Neighbours and those you interact with at the grocery store and other places you frequent while running errands offer a new network of possible local friends. There are also a surprising number of online Facebook groups and support groups available for almost any location in the world. Use the resources around you and work your way outward to build a quality network.

The Work-Life balance is difficult even without the strain of a new move to a completely new country. As one partner is getting accustomed to the new job and perhaps working late hours, the trailing spouse is left with a lot of time to explore and a lot of time to end up bored. This is often highlighted during the job search. Armed with a great resume and a fantastic skill set, a common discovery is that there are no available jobs in their area, or they may not even be allowed to work in that particular country.

Going without meaningful work can deeply affect a person’s sense of self-worth and confidence. Turning one’s attention elsewhere, such as volunteer work is an important consideration. Re-framing their role from trailing spouse to global citizen punctuates the importance and relevance of finding online work. There are other terms, such as digital nomad and freelancer. Utilizing resources such as Remote Work Hub and other similar communities provide real solutions.

This is one of the most common causes of the trailing spouse syndrome. One partner is continuing on or up with their career, and the other has ended their career by moving. It’s important to recognize one thing; the sacrifice was made together. As partners, this decision was calculated, and a choice was made. Neither spouse should be made to feel guilty for one working or the other not working.

Support needs to be extended in both directions, so work on a plan together, preferably before you even leave your home country. Network together, explore together, and succeed together. Find your people. Those that have a shared interest, hobby or sport with you. Organise and work together to share resources. Leave any gender bias at the door and be inclusive. Network as a part of everyday life to strengthen your ability to connect and find a meaningful way to spend time, whether volunteering, digital work or finding local employment.

Reframe the trailing spouse experience and be a global citizen, which will extend your available support to groups around the world. Be partners and enjoy this new adventure together. As one trailing spouse, Jessie Bryson, phrased it in her blog article on the Foreign Service community, “turn trailing spouse into a prevailing spouse!”