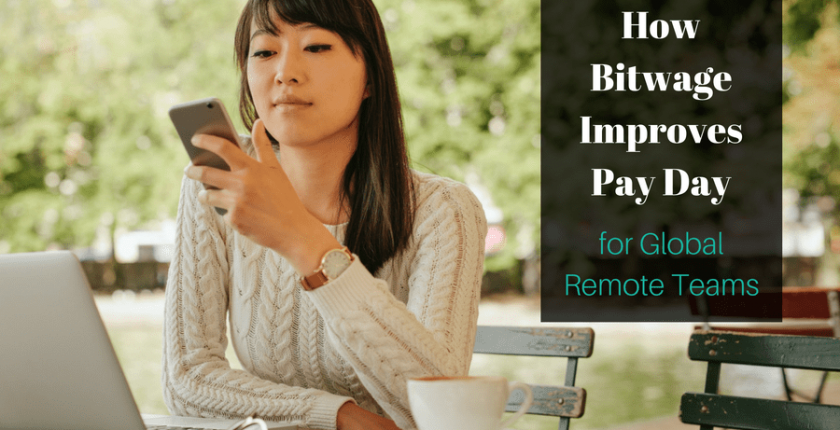 We interviewed Jonathan Chester from Bitwage to discuss how the growth of distributed teams around the world (including their own) has increased demand for fast and secure money transfers.

Electronic payrolls have been simplifying wages for employers and their employees for years. But even automated bank transfers are fast becoming a way of the past with the rise of digital currencies like Bitcoin.

In 2014, Jonathan Chester and fellow Bitcoin enthusiast John Lindsay began developing a Bitcoin payroll system. A way to quickly and securely transfer money without the hassle and expense of clearance periods and exchange rates.

They met in 2013 while both working at software giant Oracle. Jonathan was already known by his peers as ‘that Bitcoin guy’. The following year, they left the security of their careers and invested their personal savings to build their game-changing product.

Bitwage was launched in July 2014 as a payroll processing system, enabling companies to pay their employees in Bitcoin. But as Jonathan explains, its focus would soon change from employers to the recipient.

A lot of freelancers and contractors were already familiar with and set up to receive Bitcoin payments, but employers were hesitant to change their ways.

Bitcoin Payroll for Individuals was consequently launched in November 2014, enabling users to receive part of their payment as Bitcoin without employers needing to alter their processes.

But the transformation didn’t stop there. The value of Bitcoin tumbled in 2014 from its peak of US$1000 to as low as $350. Jonathan admits he and John feared the worst for the future of Bitwage, but instead, the company experienced unexpected growth.

New customers were coming on from certain areas, and we looked into it further to understand why. In Brazil for example, people were waiting at least 15 days or up to a month to access international payments. That’s a long time to wait for your money when you have bills to pay. Suddenly, these customers were able to get their money in a next-day turnaround, or as little as two hours in the Philippines.

Bitwage now enables users to invoice employers and clients without requiring the employer to sign up to the platform. It also offers plans that pay out local currency in Brazil, Mexico, the Philippines and across Europe through a new solution they simply call, Bitwage Invoicing.

To date, Bitwage has processed more than US$6-million in payroll volume, and services over 6000 registered users, supporting more than 30 local currencies.

Operating Bitwage with its own globally distributed team has been key to understanding the unique needs of its clients, also working virtually and remotely across the world.

As we grow and stretch out, we have more people working from the same areas as our customers, which allows more local understanding of the issues and problems they face, Jonathan says.

Bitwage employs people in tech, engineering and customer support roles. It’s a diverse team, but it’s imperative they all have one thing in common.

“They need to have a lot of passion, excitement for what we’re doing and what we provide. They need the ability to be a fast learner, not be afraid to make mistakes, learn from their mistakes, and have some level of competency in what they’re doing,” Jonathan explains.

The passion component is the most important. When you’re working on the other side of the world, you want them to stay motivated and have a passion for what they do.

The Bitwage team operates and communicates using online tools like Slack and Skype, and team members are encouraged to meet each other in person wherever possible.

“It’s like a family environment, and I’m sure it will be different as we get bigger, but for the time being, we’re just like family,” says Jonathan.

Growing the team has allowed Jonathan and John to take a step back from the hands-on work to assume the role of president and CEO respectively. Jonathan is also a regular contributor to Forbes.

Bitwage operates with performance incentive mechanisms and equity bonuses for certain projects as well as compensation plans. And the company plans to expand further to aggressively target the growing market of distributed teams.